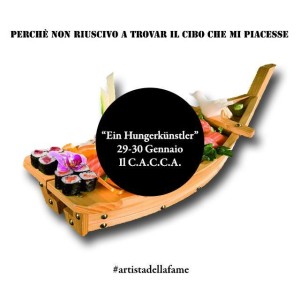 Ein Hungerkünstler is a work that speaks of world hunger through the paradox. Using a series of provocative devices that move between the poles of scarcity and abundance the artists provide the participants the opulence without consumption up to the surprising end of the action.

The installation is composed of four interconnected devices that function as the elements for the relational enjoyment of the entire work. Outside of the closed room, a performance artist welcomes participants in groups of 15.

He gives them a single instruction and then knocks on the door to the room. Another performance artist, within, opens the door. The participants enter in single file and receive an empty plate which they must hold on tight, without ever letting go of it for the entire duration of the action (10 minutes, from the moment they enter the room).

Exhibited in the room are: the work, 1758. Perché non riuscivo a trovar il cibo che mi piacesse and the installation Il ricco buffet, preparato con cura, a table laid out with a sumptuous buffet. The work is lit with neon lights from below; the buffet with table top candle holders. A digital timer counts down the time remaining from when the participants enter the room. Speakers transmit the short story reading on high volume.

The performance artist in the room invites the participants to enjoy the wall installation while they await the arrival of other people to share the buffet with. Halfway through the experience, the performer repeats that they are awaiting other people for the buffet.

When the time has expired, the performer draws the participants’ attention with a whistle and asks them to return the plates to him; he then invites them to leave the room without having touched the food. As the participants exit the room, the other performer provides each participant with a postcard that reveals the mechanism and the reason why they were denied the food inside the room.

“Ein Hungerkünstler” is a work that confronts a very difficult and delicate subject: world hunger. It does so by employing a participatory installation and a relational action that places participants in an ideal situation to share an “empty plate” with those who suffer hunger.

The conceptual element that sustains the entire action and connects the devices is the paradox. The work mounted on the wall is inspired by Kafka’s story of the same name “Ein Hungerkünstler” which narrates the decline of a professional “hunger artist” whose fame as “the greatest faster of all time” quickly wanes with the arrival of new, fashionable attractions. On his deathbed, he refuses the admiration attributed to him during his lifetime, arguing that he did not deserve it since fasting had always been easy for him, and explaining that the reason he fasted was not due to determination and commitment to his artwork but rather simply a question of taste – because he could not find food to his liking.

This grotesque and paradoxical conclusion is translated in the work mounted on the wall through the installation of 30 culinary magazines (all dated January 2016) that collect a total of 1758 recipes. Each magazine is deprived of their own, sparkling and colorful identity – thus becoming monotonous and insignificant in culinary terms (the new paradoxical meaning is provided by the quotations taken from the story and by the printed definitions on the new, white covers) and thereby reflecting the apathetic and listless demeanor of Kafka’s fasting artist.

The magazine as a medium was chosen as a symbol of a type of superficial entertainment – those who suffer hunger are excluded from this approach to food; in this action, the magazines are, in fact, potentially available for consultation and enjoyment by the participants, but it results extremely difficult while they hold the empty plate in their hands. Hence, the message is: “those who suffer hunger (those holding an empty plate in their hands) are denied the luxury of considering food as entertainment (they cannot browse through culinary magazines).”

From one paradox to another, stronger one. As we interpret it, world hunger possesses a paradoxical pattern. Hunger is not about the lack of food or resources; it’s about the inability for a certain part of the population to have access to them, even when physical, concrete barriers are removed.

This paradox is formally translated in “Ein Hungerkünstler” with the lavishly staged buffet that is theoretically and for all practical purposes available to the participants, but they are not allowed to enjoy it even though there are no physical obstacles hindering them from accessing the table; there is simply a custodian (the performance artist) who asks them to wait until others arrive.

At the end of the action (marked by the timer – the only other object in the room aside from the two installations – similarly to the clock which, in Kafka’s story, is the only object in the hunger artist’s cage; this reflects how important the dimension time and the concept of waiting are to the Kafkian character and to the participatory action) the participants are invited to exit the room and asked to hand back their empty plate without having eaten any food.

Then, the second performer at the exit performs a fundamental gesture that conceptually closes the work: she gives each participant a postcard. The front side of the postcard reads: “we are waiting for other people” (words used inside the room to delay the action of eating the buffet); the backside has a number written on it (794 million) that indicates the number of people who suffer hunger and hold an empty plate in their hands each day – not simply for the 15 minutes duration of the action.

At the end of the evening, the buffet, pristine and intact, is donated in its entirety to a charitable organization, contributing in part to alleviate the difficulties of those near us who suffer hunger. 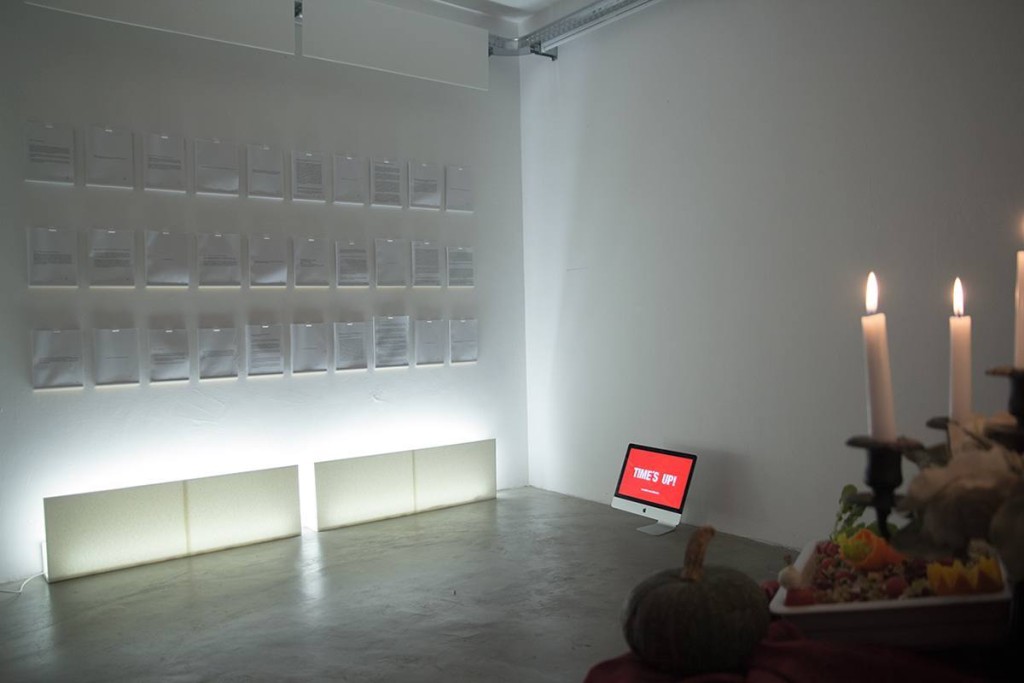 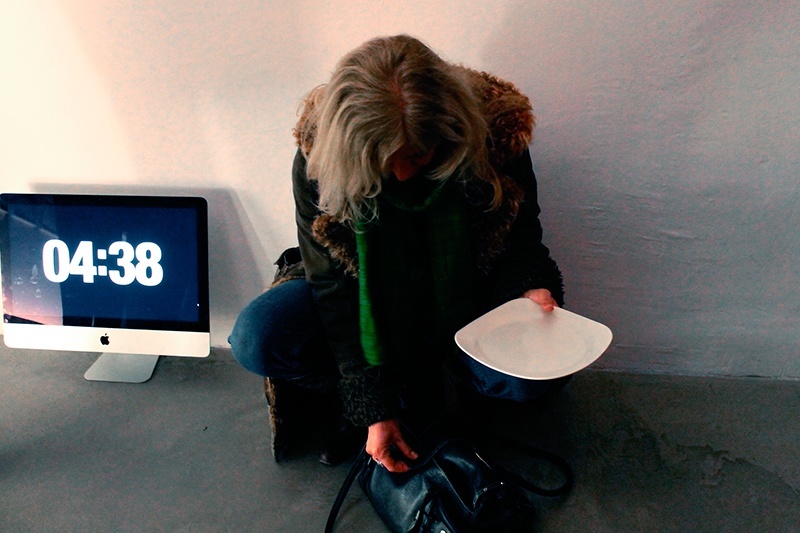 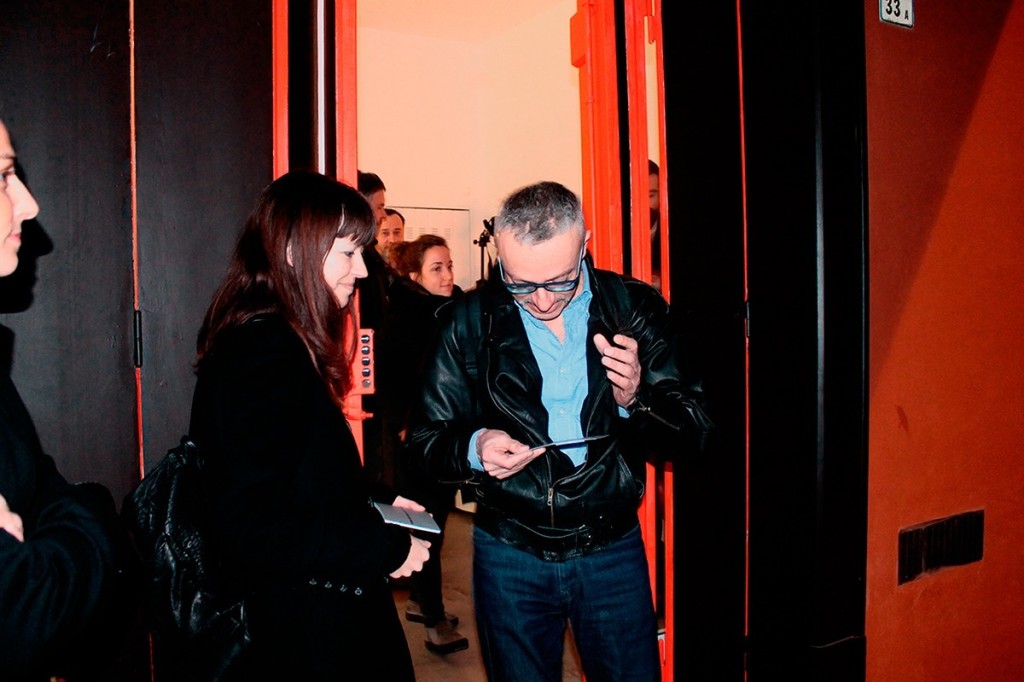 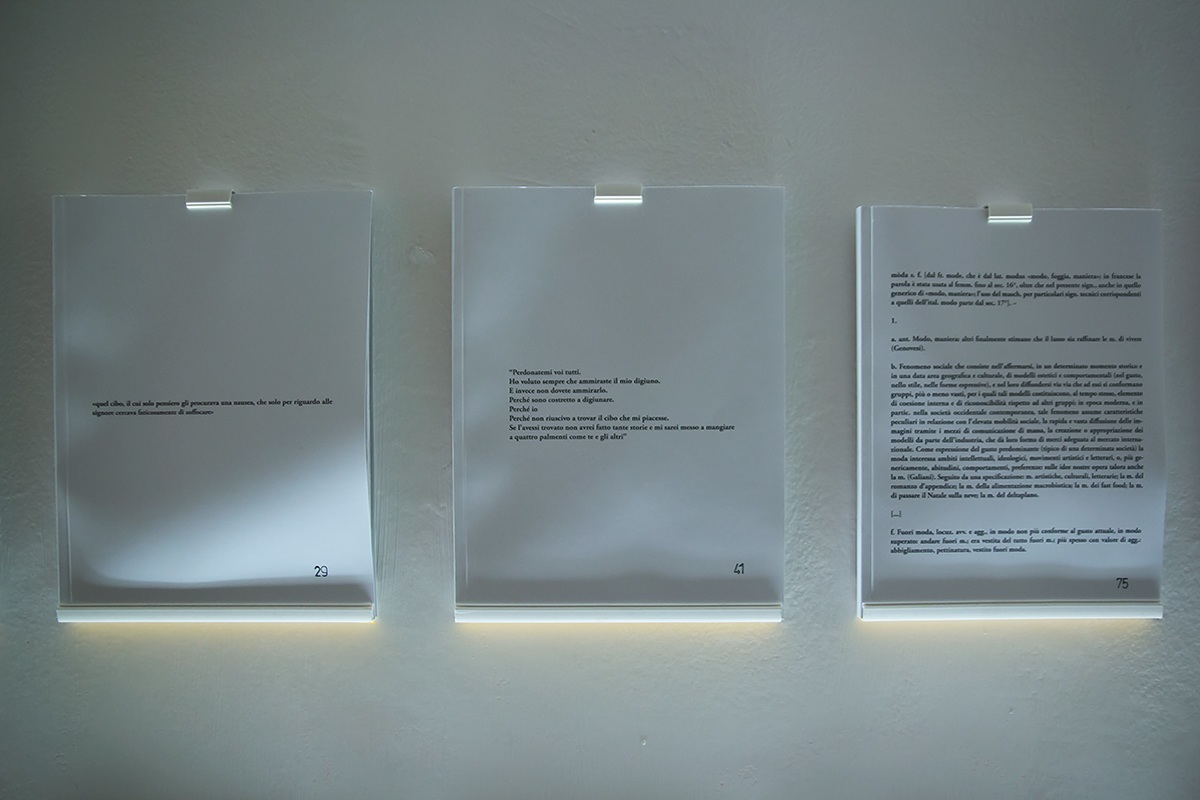 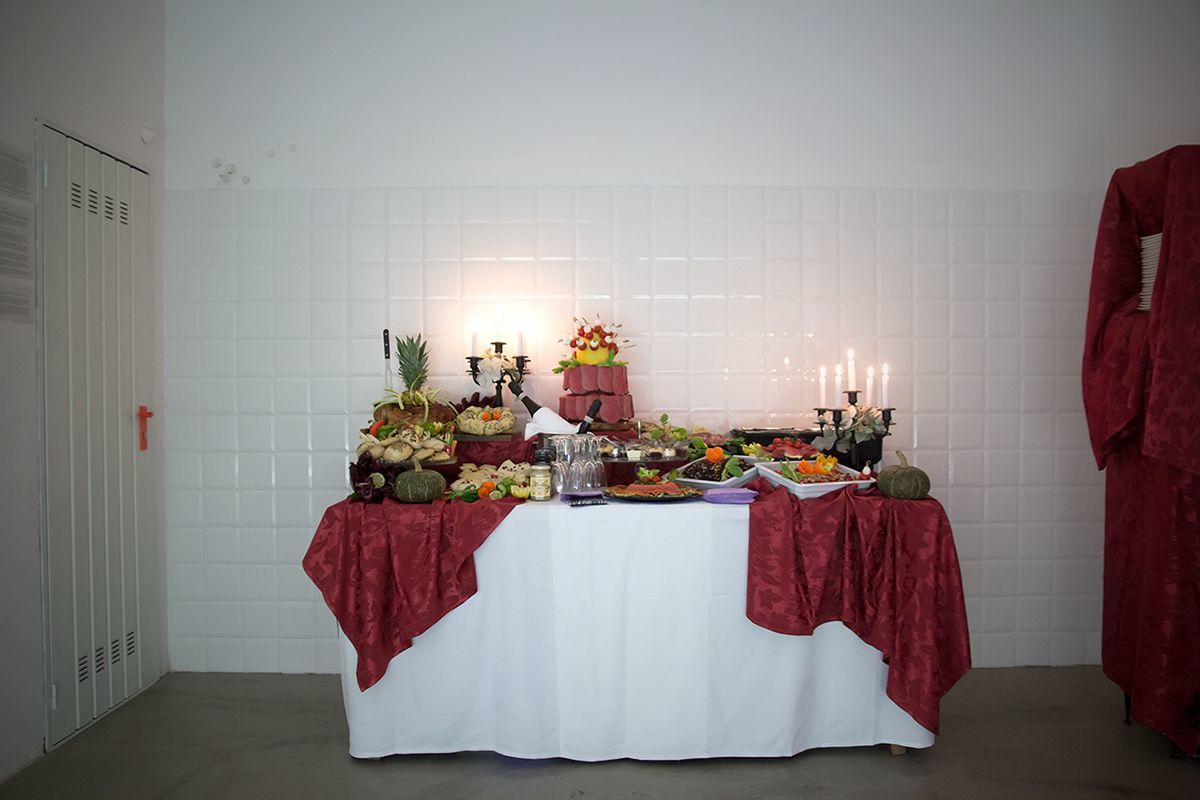 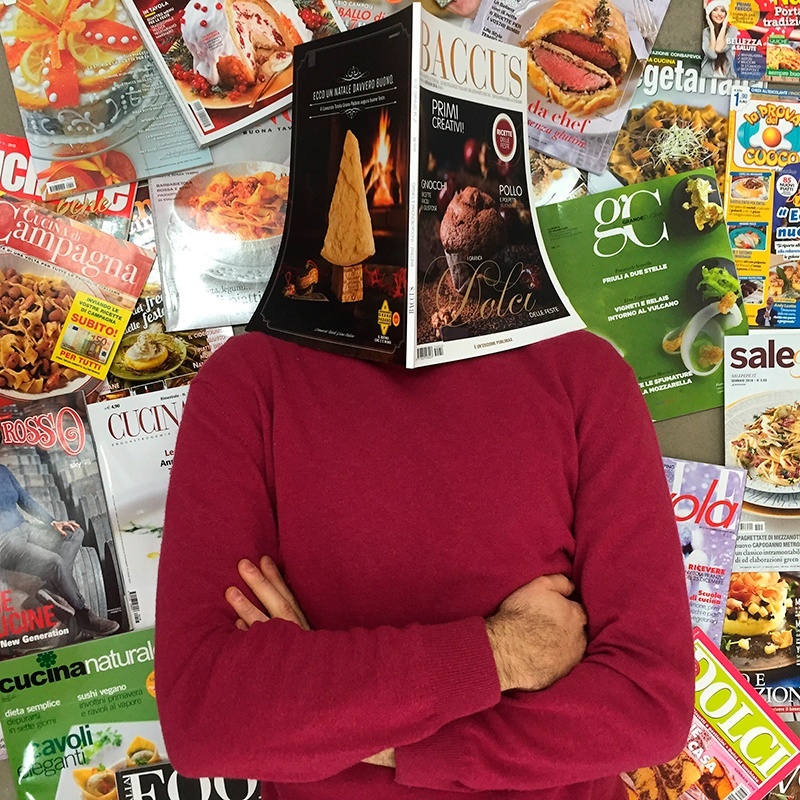 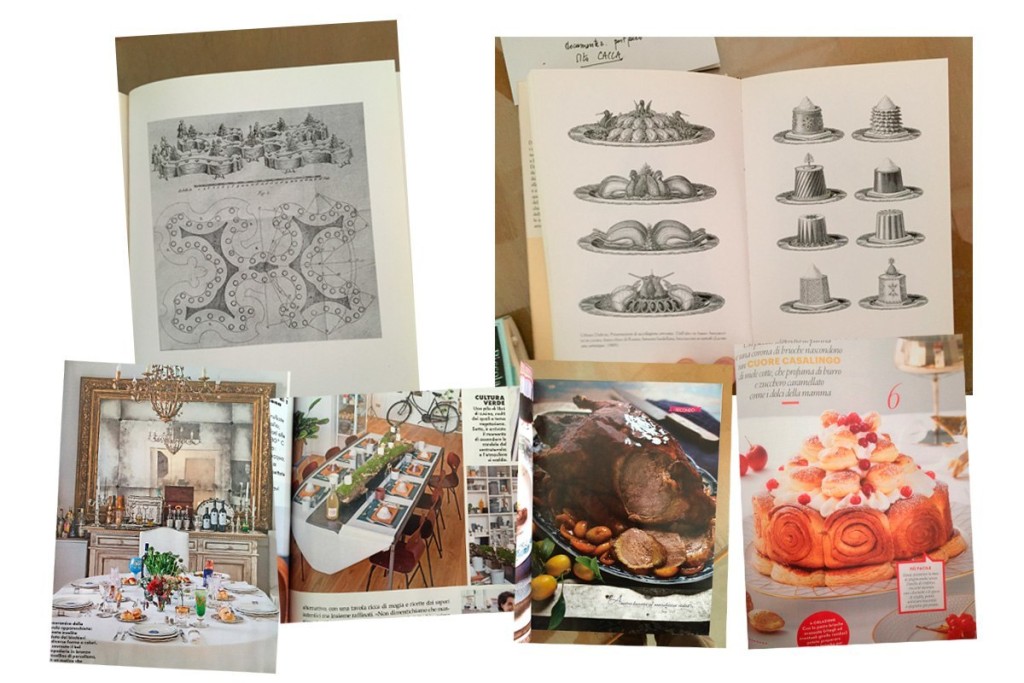 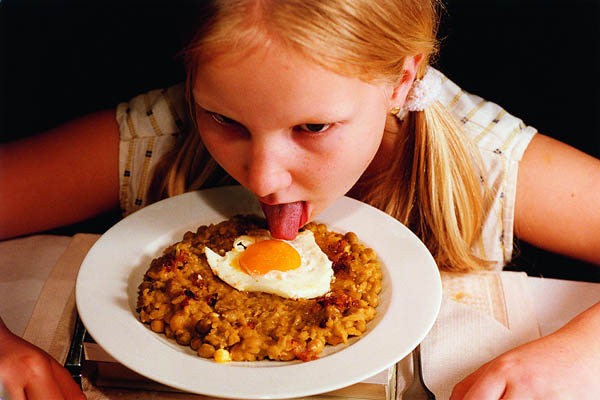