trEATticon is a journey. It’s an evolutionary excursus on the act of eating consider as a cognitive act in the world. How do we know the world through food? TrEATticon is a work in three acts: MATERIA, DELETERIA and AETHERIA, that are also three “Action Eating Events” in which we must use more and more one’s injinuity… or less and less?

Three different tables were displayed inside the gallery at six different times during a period of three months. Each installation reflected the specific articulation of a project design that involved a cycle of three action eating events (repeated in sets of two) and the production of dedicated graphic material. A self-made fanzine illustrates the entire project.

The audience was allowed to enter the installation room in groups and was only given partial information about their role in the event: they were only told that they would eat, but not what they would eat and, especially, how they would eat – in order to encourage participatory dynamics.

trEATticon is a unique research project in three acts that focuses on the action of “eating” as a cognitive approach to the world. It is an overview of evolution, a journey through the elements that make up edible substance – a crescendo of experimentation and epistemological study through the language of food.

trEATticon associates an element from classical doctrine, a particular approach to food, and a different intellectual age of man to each of the three acts. The elements of ancient Greek doctrine provided the most distinguishing overtones to each phase of the project. Earth, Water and Wind clearly define graphic elements, food choice, culinary preparation, colors and forms; Fire underscores the project itself in an ideal, perpetual and constant manner.

The approach to food focused on in each phase is strictly connected to the intellectual age associated with the act. The ages follow one another in natural order – from childhood to adolescence and to maturity. This is a work in progress. The universal and extensive nature of the concepts engaged implicates the unlikelihood of obtaining a single and definitive perspective on the matter. We intend to develop this project in other investigations and uses.

The top of an exhibition pedestal is covered with a thin sheet of gilt cardboard and a 5kg chocolate tetrahedral pyramid sits on top. There are two hammers with rubber heads and two carpentry chisels that the audience can use to dig into the pyramid and eat it.

The shape of the tetrahedron is the Platonic solid that represents the element of Fire; Fire is the undercurrent theme in the entire trEATticon project. Offering the tetrahedral pyramid at the event’s opening represents a baptism of sorts and a good omen for the project.

Act I – “Materia” (matter) – is related to substance. Direct sensory perception instinctively guides “Materia”, where the line between “appearance” and “reality” is revealed by the use of hands and mouth. The stratagem of hiding food by camouflaging it among natural elements serves as a device that erases a participant’s familiarity and immediate recognition of food by removing known markers; hiding food among real, natural elements creates greater disorientation and puts the audience in an ideal situation similar to that experienced by early humans who had to confront the unknown every day, and decipher what edible products were at their disposal to ensure daily survival. Discovering a personal access to food and deciding whether or not to share the discovery, as well as the food itself, with others – thereby creating a community – or instead, isolating oneself with the knowledge and consuming it on one’s own, were both possible outcomes in this performance, as well as refusing any sort of social engagement and remaining a passive observer to the actions of the others. The age of man that corresponds to the approach expressed in “Materia” is childhood where cognitive learning games are played out, direct and unmediated by tools and codes, where the mouth is used to explore and extract sensory information from the surrounding world.

The table is covered with garden compost and the pieces of brushwood, pebbles, pieces of wood and the leaves are placed on top. The semirefractory clay and salt “imitation” rocks with food inside are placed among these elements; the boiled eggs with shells unbroken are hidden among the dried leaves and the edible sprouts are placed on the cabbage leaves. Venison stew cooked at a low temperature is hidden inside the stone container. Acoustic sounds from the Amazon Forest at dawn permeate the environment.

Act II – “Deleteria” (deletery) – seeks knowledge through perception mediated by tools or equipment. It goes beyond mere scientific research using a propositional and experimental model. The element that conducts “Deleteria” is Water. The intellectual age that mirrors the spirit of experimentation is adolescence – a time of instability and transformation. The name “Deleteria” hyperbolically recalls the meaning of the adjective “deleterious”, thereby emphasizing and ironic aspects of the transformation processes that food can endure when technology is involved and when sterile, scientific research favors final results over origins. In the case at hand, a focus on the quality of the raw materials makes an ideal connection with Act I; likewise, this intention highlights how the origins of a process (the raw materials, in the case of food and the kitchen) are always the determining factor for any subsequent development whatsoever.

The stainless steel table is covered with equipment common to chemical analyses laboratories. Each participant occupies one of the 12 stations that have been prepared. Following written and oral instructions they recombine the dehydrated food, using water to mix it. At the end of the activity, they can eat an actual meal.

Act III – Aetheria (ethereal) – conceptualizes cognition through the gaze and it focuses on the intellectual abstraction of food-as-image. Food-as-image is not metaphysical, simply a leap in the level of substance: matter becomes matter-as-image, where the food-object is suspended, de-materialized, stripped of its tangible qualities. The intellectual age associated with “Aetheria” is maturity. Its complex nature can lead to deviations that can create degenerate phenomenon such as Food Porn – favoring an exasperated approach to the aesthetical and perceptive qualities of food over more significant apsects such as quality raw materials, respect of the original qualities of products and the joy of preparing food. In an exchange of roles, the voyeur participant who is used to gruesomely watching food-as-image offered by the media on glossy magazines, on the internet or over the airwaves finds himself as the object of his very own voyeurism. The video artist records and simultaneously projects the expressions and reactions of participants as they accept ephemeral and insubstantial dishes with pompous-sounding names. The growing provocative crescendo resolves at the end with the final surprise dish: a macaroni pasta timbale – a dish that is a clear expression of popular culture and a far cry from the “aesthetics at all costs” culinary model, yet maintains a certain “porn” value in quantitative terms. The dish appeases hunger and removes any compliance or nervousness that might have been sorely borne or grudgingly concealed throughout the “dinner”.

The 12 framed photographic reproductions, on a 1:1 scale, are set on top of a table covered with a pristine white tablecloth. Each photograph depicts a beautifully laid out place setting seen from above with two distinguishing features: an I-phone to the left of the forks and an I-pad on top of the center plate. Guests are invited to take their place in front of the virtual place setting to enjoy a chic and insubstantial dinner. As we serve an impeccable dinner in formal terms, a video artist videotapes and simultaneously projects the guest’s faces and reactions to the ephemeral dinner courses in real time. 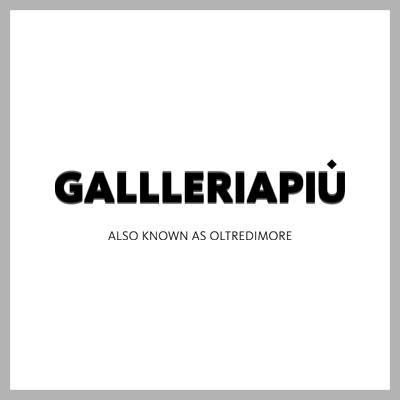 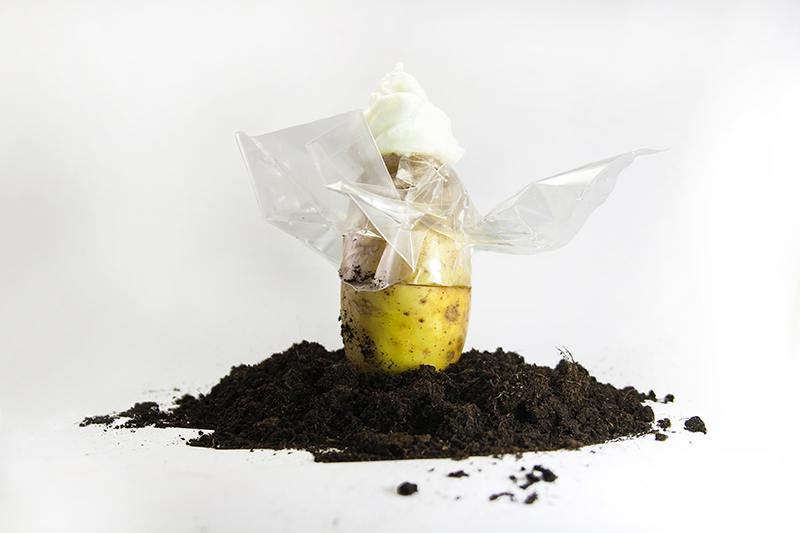 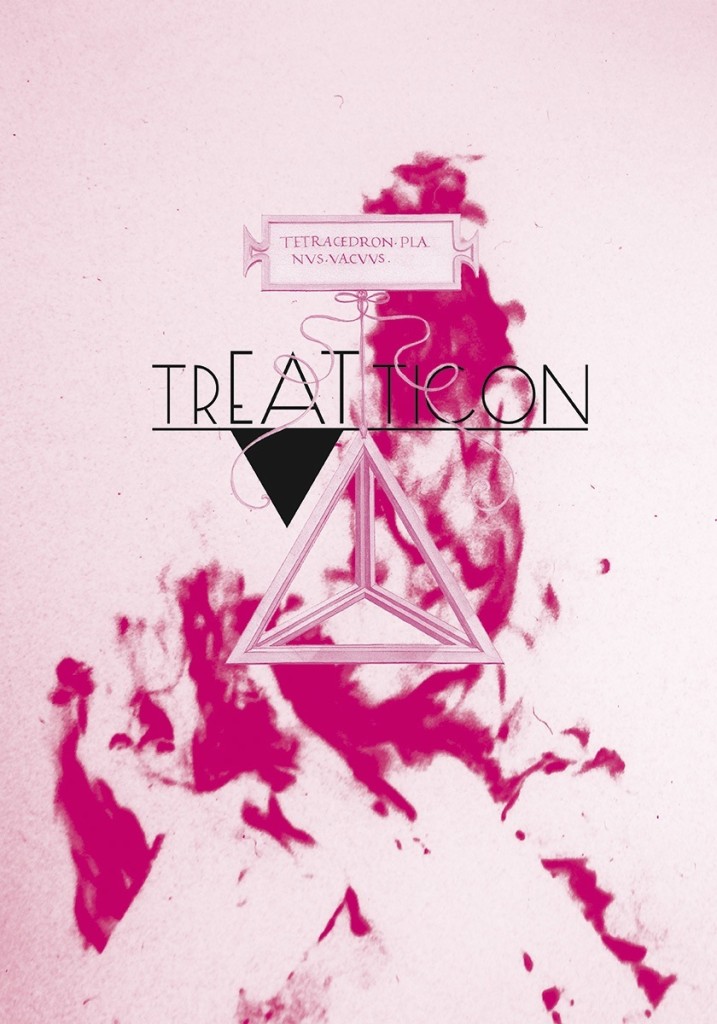 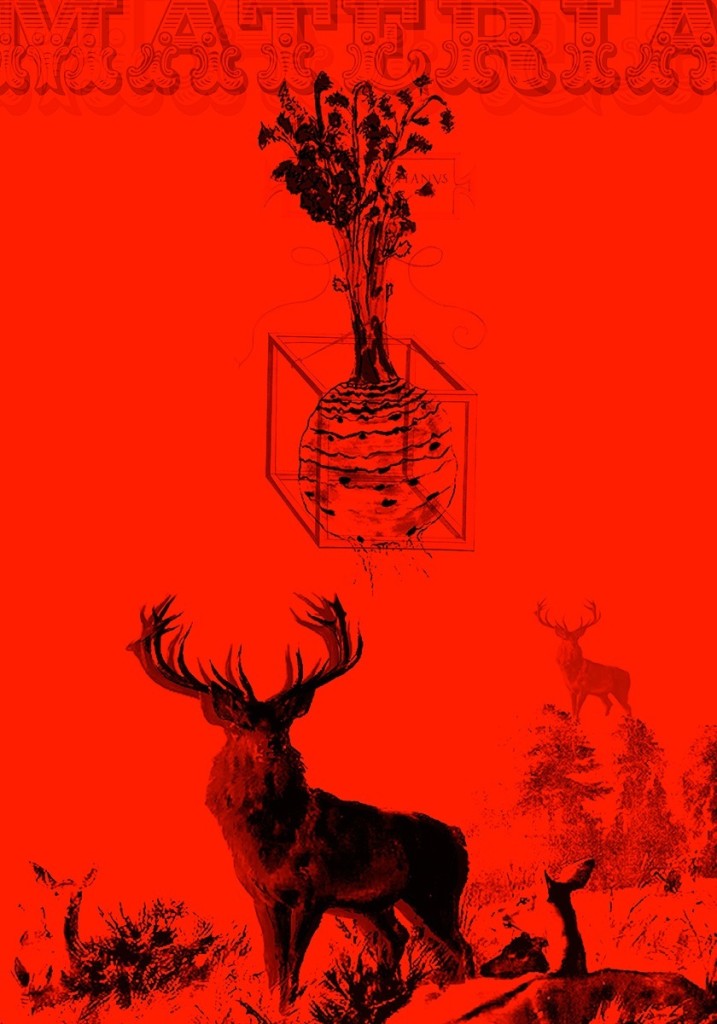 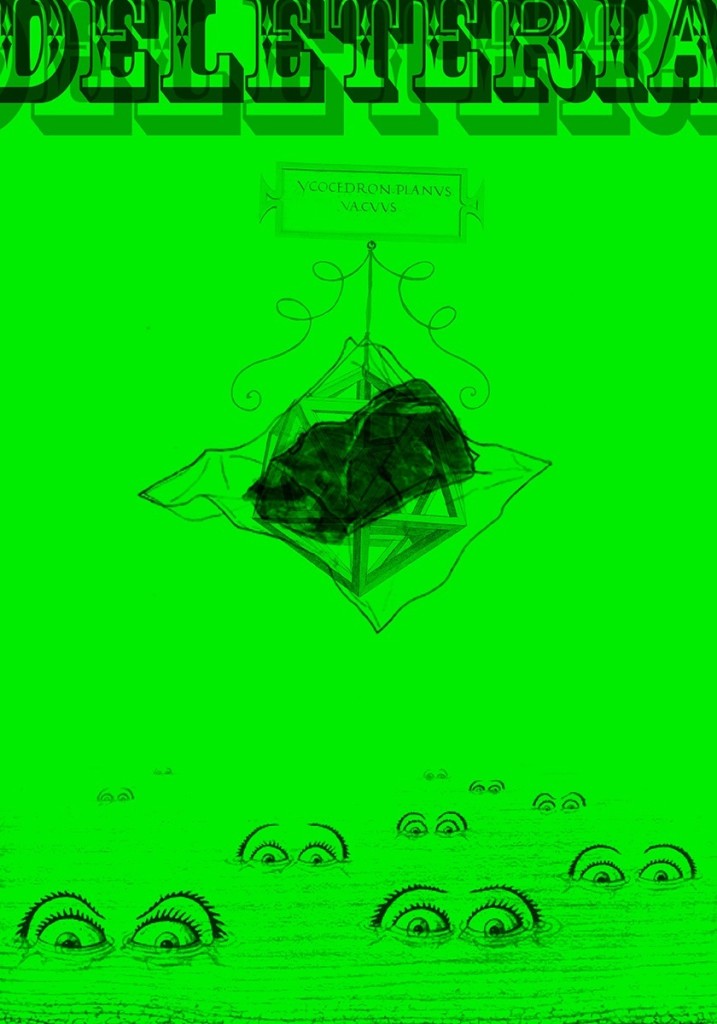 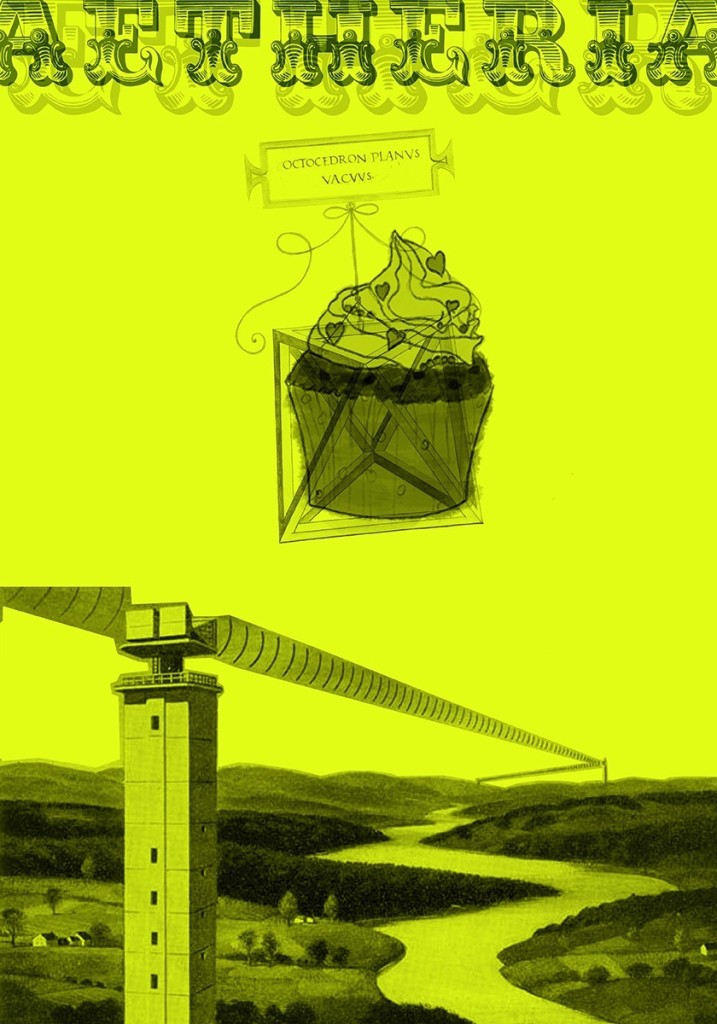 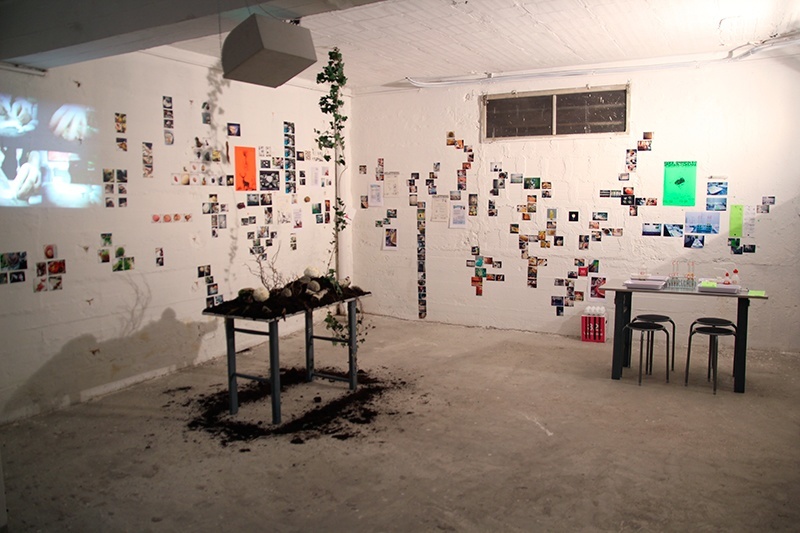 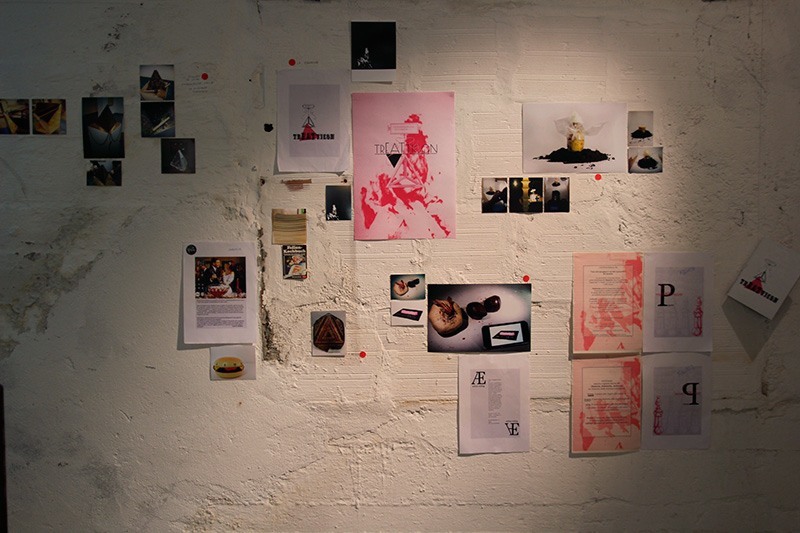 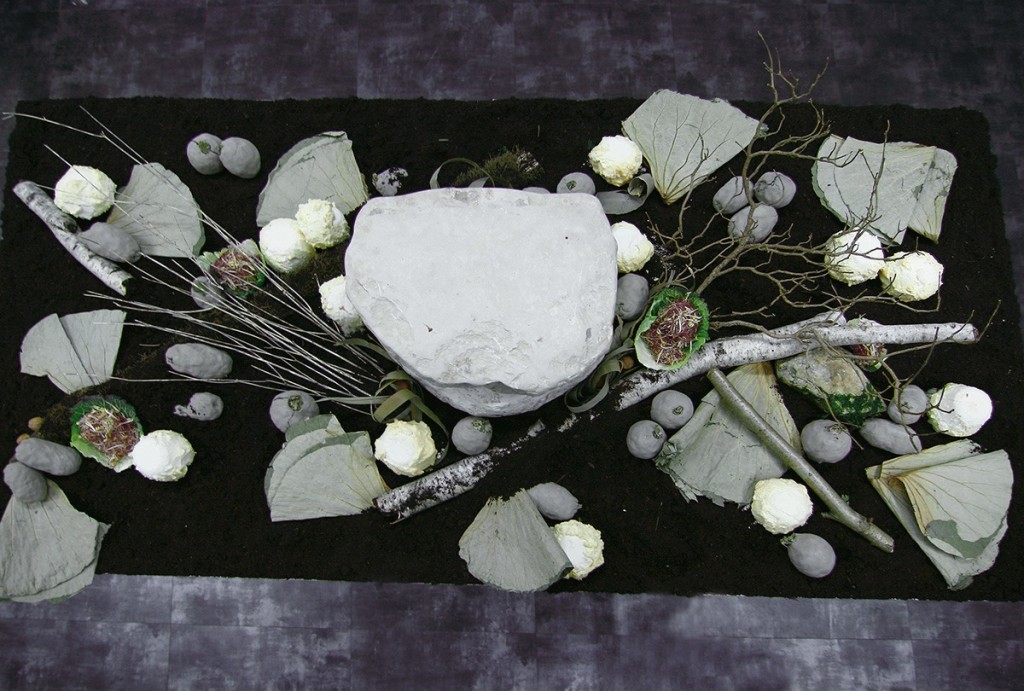 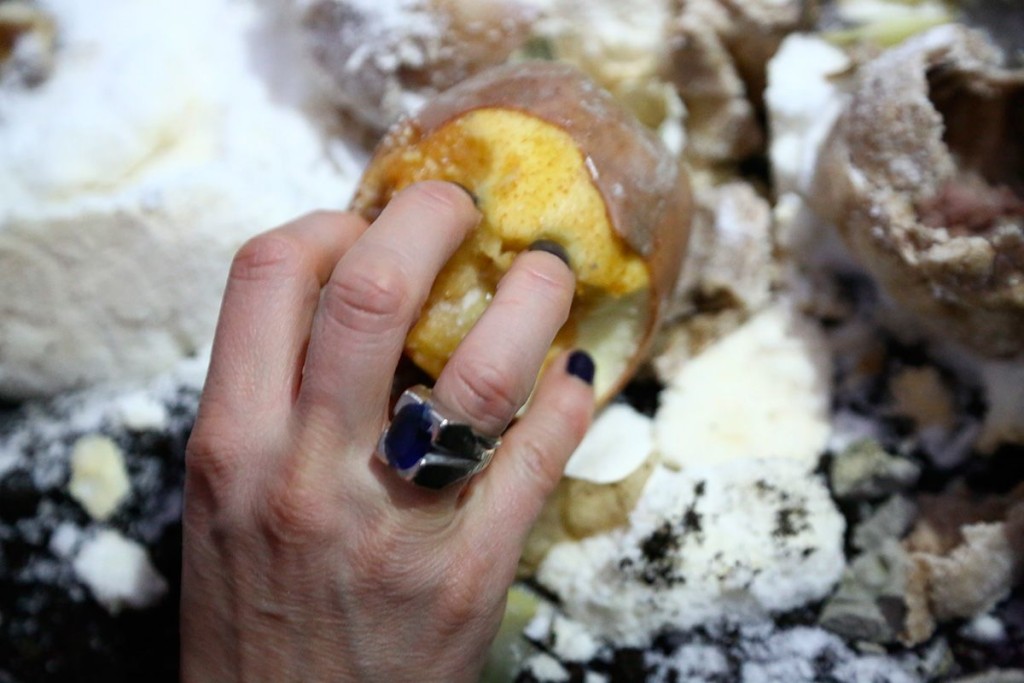 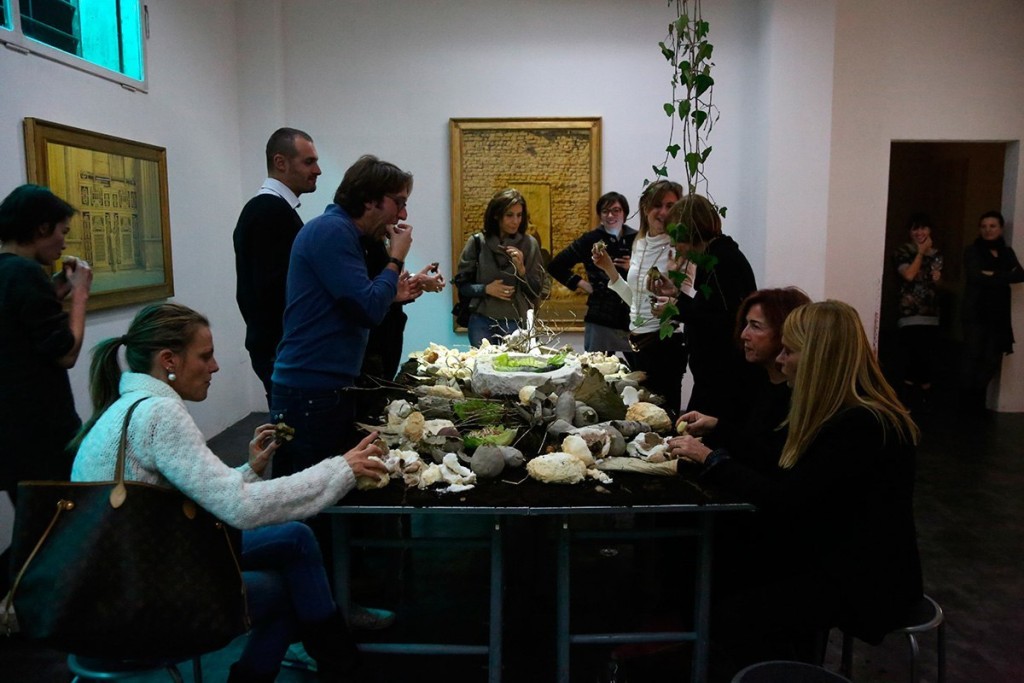 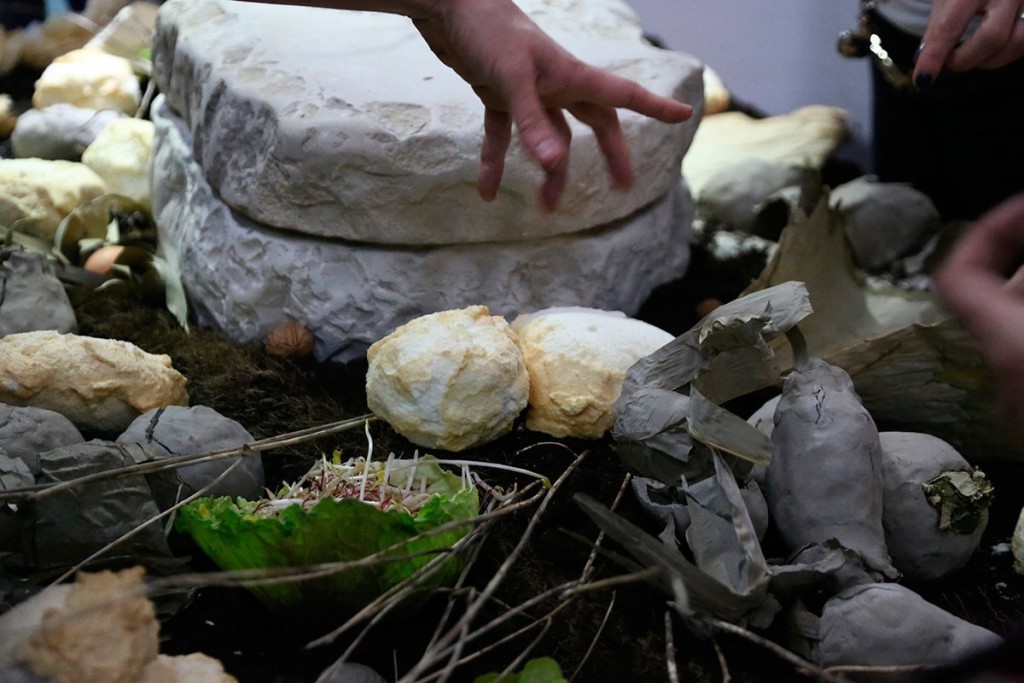 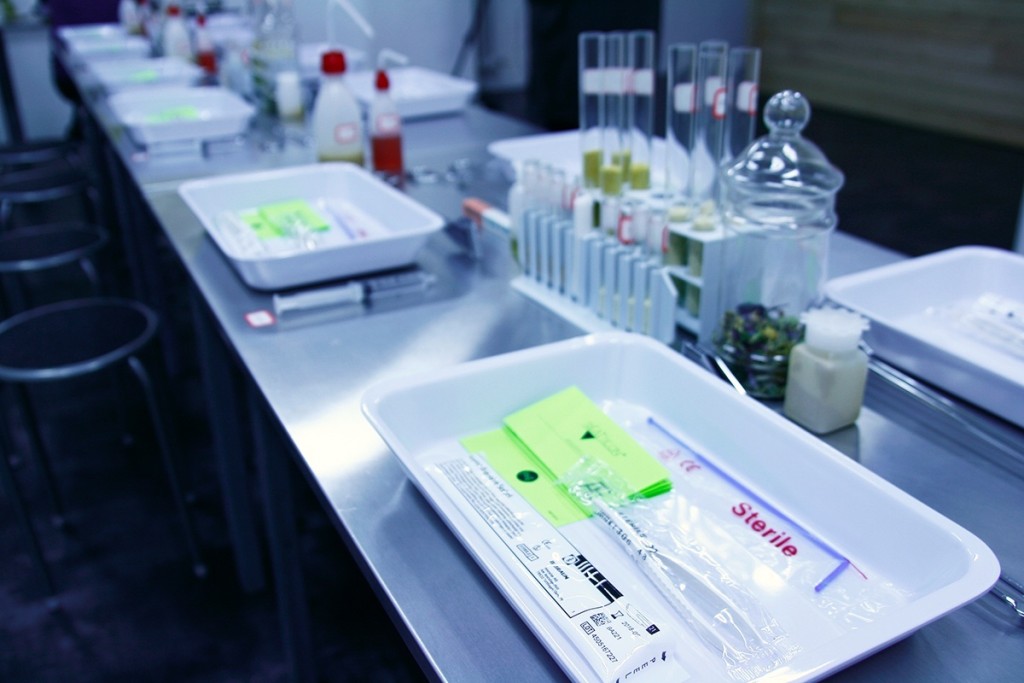 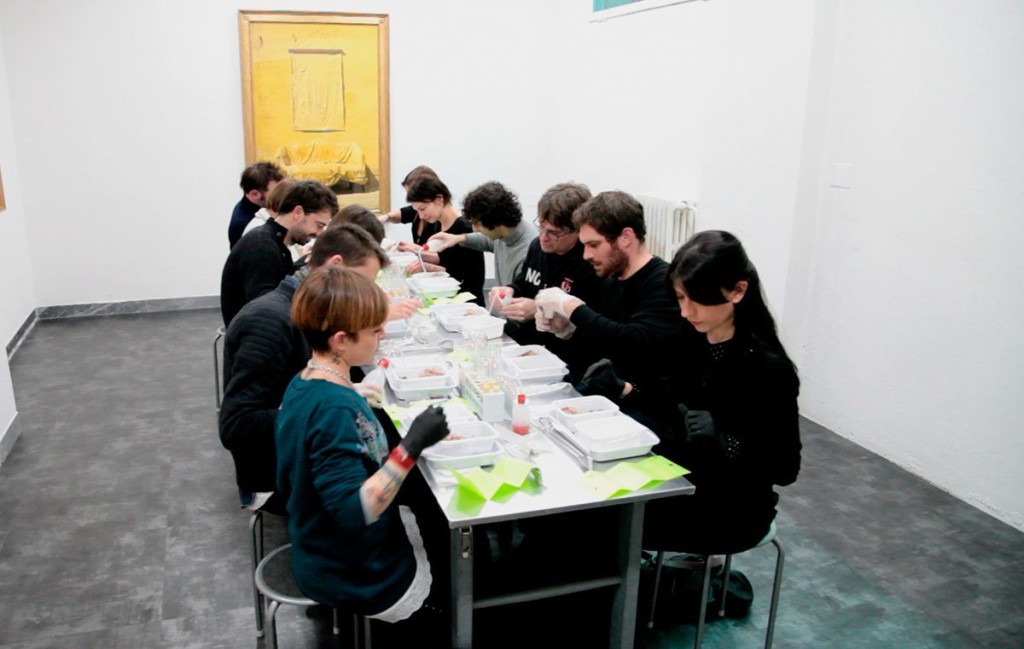 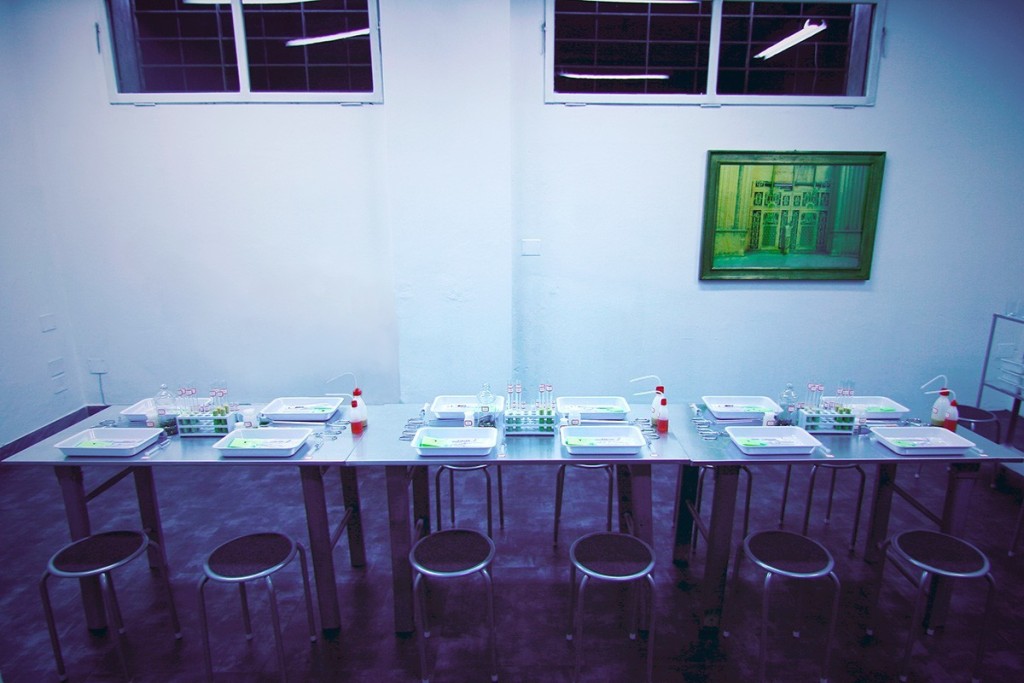 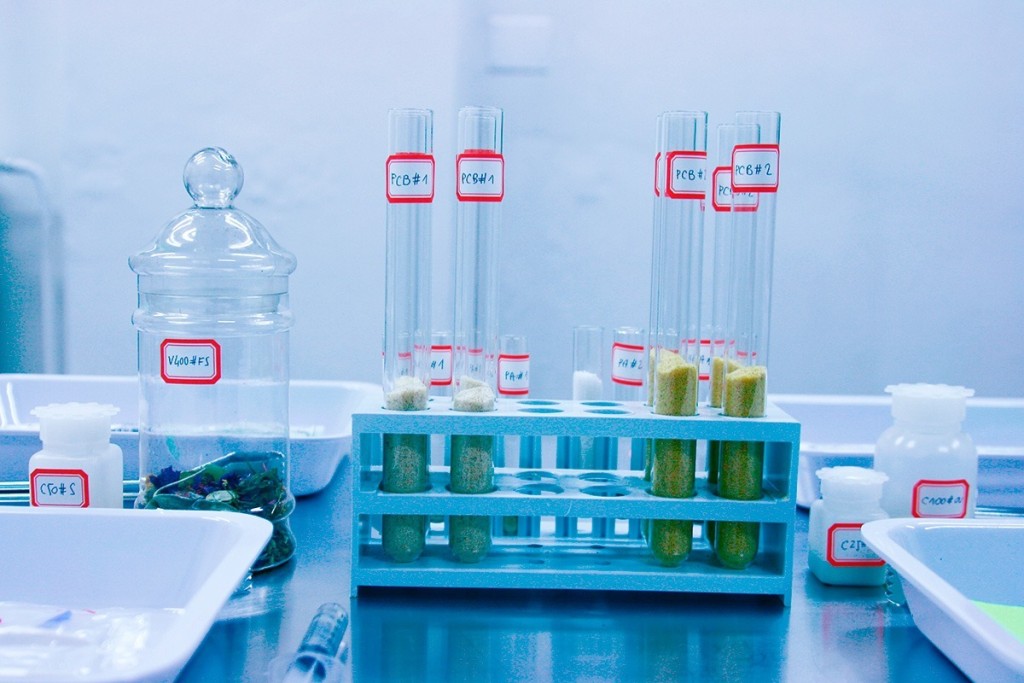 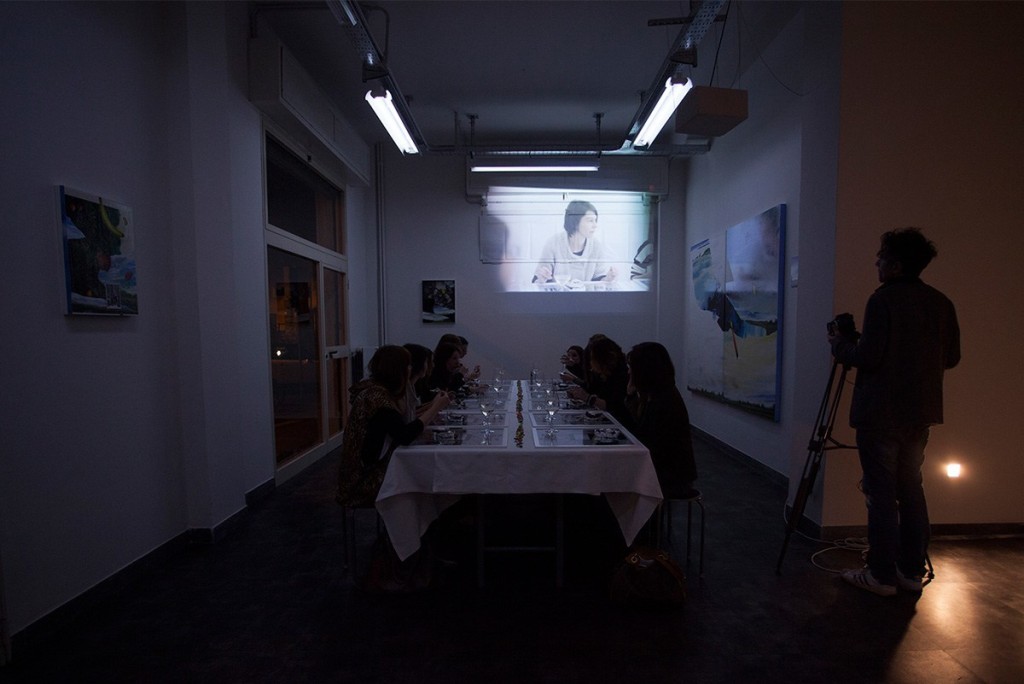 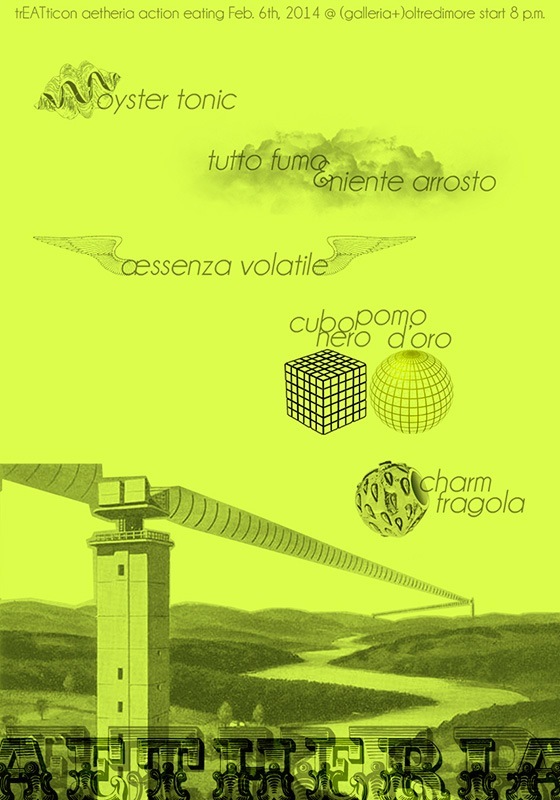 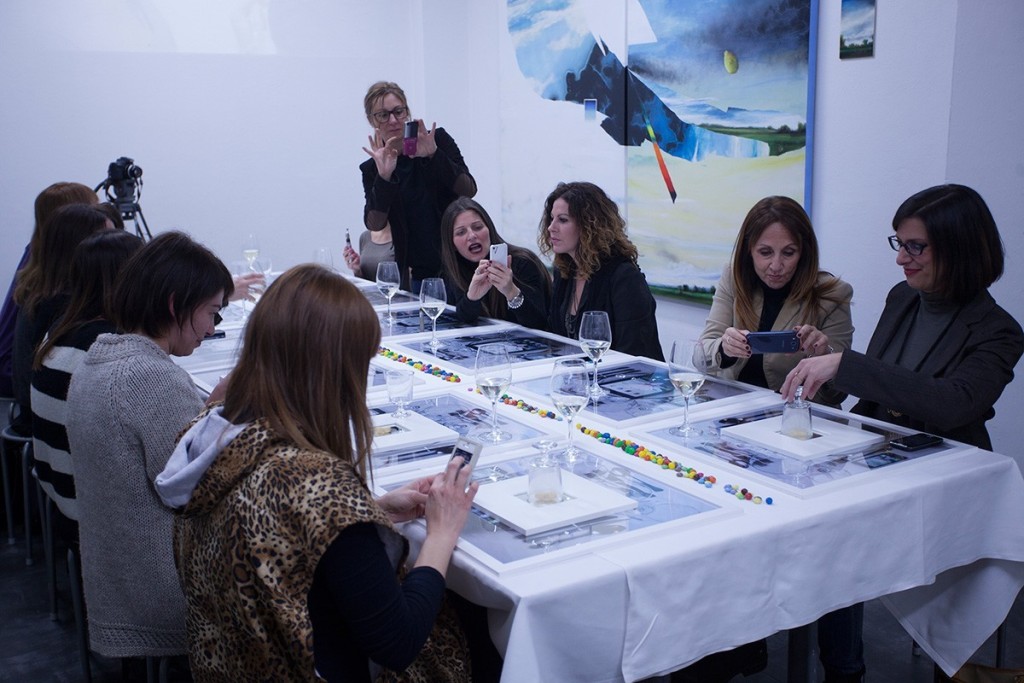 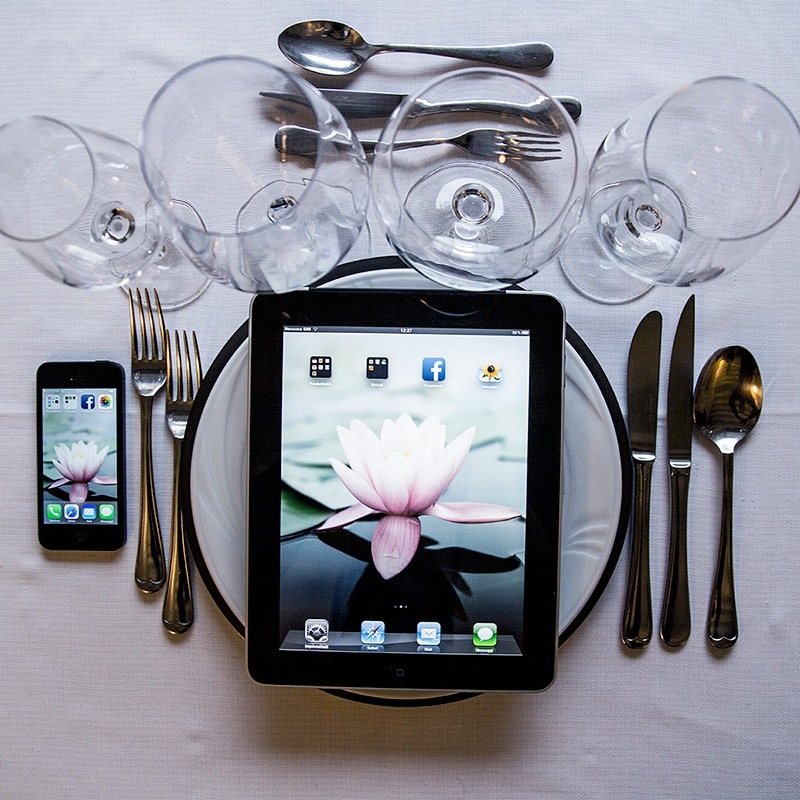 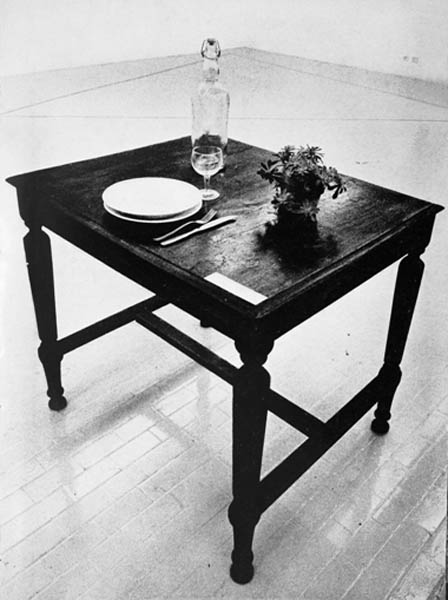